We are excited to welcome Dr. John P.A. Ioannidis of Stanford University, author of the influential 2005 paper “Why Most Published Research Findings are False,” to the U-M campus for a series of talks sponsored by the Michigan Institute for Data Science (MIDAS), the Michigan Integrated Center for Health Analytics and Medical Prediction (MiCHAMP), the Institute for Healthcare Policy and Innovation (IHPI), the Michigan Institute for Clinical and Health Research (MICHR), and the Medical School (Computational Medicine and Bioinformatics, Internal Medicine, and Molecular and Integrative Physiology).

Dr. Ioannidis will be in Ann Arbor from April 18 – 20 at the following events:

“The power of bias and what to do about it”
Wednesday, April 18, 2018 | 4:30pm | BSRB: Kahn Auditorium
The lecture will present evidence about the prevalence and magnitude of biases across different fields of investigation. It will also discuss potential solutions that can be used to prevent or minimize the impact of these biases. 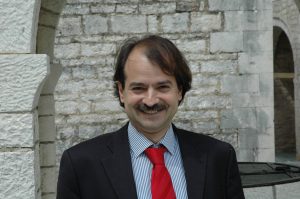 Born in New York City in 1965 and raised in Athens, Greece. Valedictorian (1984) at Athens College; National Award of the Greek Mathematical Society (1984); MD (top rank of medical school class) from the National University of Athens in 1990; also received DSc in biopathology from the same institution. Trained at Harvard and Tufts (internal medicine and infectious diseases), then held positions at NIH, Johns Hopkins and Tufts. Chaired the Department of Hygiene and Epidemiology, University of Ioannina Medical School in 1999-2010 (tenured professor since 2003). Adjunct faculty for Tufts University since 1996 (professor rank since 2002), Director (2008-2010) of the Center for Genetic Epidemiology and Modeling; also adjunct professor of epidemiology at Harvard School of Public Health and visiting professor of epidemiology and biostatistics at Imperial College. Member of the executive board of the Human Genome Epidemiology Network and Senior Advisor on Knowledge Integration at NCI/NIH (2012-2016). Served as President, Society for Research Synthesis Methodology, and editorial board member of many leading journals (including PLoS Medicine, Lancet, Annals of Internal Medicine, JNCI, Science Translational Medicine, Clinical Chemistry, Molecular and Cellular Proteomics, AIDS, IJE, JCE, Clinical Trials, and PLoS ONE, among others) and as Editor-in-Chief of the European Journal of Clinical Investigation (2010-now). Delivered ~500 invited and honorary lectures. Recipient of many awards (e.g. European Award for Excellence in Clinical Science [2007], Medal for Distinguished Service, Teachers College, Columbia University [2015], Chanchlani Global Health Award [2017]). Inducted in the Association of American Physicians (2009), European Academy of Cancer Sciences (2010) American Epidemiological Society (2015), and European Academy of Sciences and Arts (2015). Honorary titles from FORTH (2014) and Ioannina (2015) and honorary doctorates from Rotterdam (2015) and Athens (2017). Multiple honorary lectureships (Caltech, Oxford, LSHTM, Yale, U Utah, UConn among others). The PLoS Medicine paper on “Why most published research findings are false” has been the most-accessed article in the history of Public Library of Science (>2 million hits). Author of 6 literary books in Greek, two of which (“Toccata for the Girl with the Burnt Face” (Kedros 2012) and “Variations on the Art of the Fugue and a Desperate Ricercar” (Kedros 2014)) were shortlisted for best book of the year Anagnostis awards. Brave Thinker scientist for 2010 according to Atlantic, “may be one of the most influential scientists alive”. Author of ~1000 papers in peer-reviewed journals, 68% of papers as single/first/last author. Highly Cited Researcher according to Thomson Reuters in both Clinical Medicine and in Social Sciences. Citation indices: h=157, m=7 per Google Scholar (h=131 per ISI and Scopus). Current citation rates: >2,500 new citations per month per Google Scholar, >1,300 new citations per month per Scopus or Web of Knowledge.