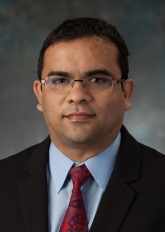 Abstract: Recent technological advances in ubiquitous sensing, networking, storage and computing technology is leading to emergence of new paradigms such as Internet of Things, Industrial Internet and Cloud Robotics. These paradigms have led to an exponential explosion in the availability of high volume high velocity time series data which is posing new challenges in data analytics. Classical machine learning techniques exhibit poor scalability in dealing with such high dimensional continuous valued data, and often do not take advantage/preserve the dynamics inherent in the temporally evolving data. In this talk, I will describe a Koopman operator theoretic framework whereby one can cross-fertilize ideas from dynamical system and control theory with machine learning and statistics in order to address some of these challenges.

Koopman operator is a linear but an infinite-dimensional operator that governs the time evolution of observables or outputs defined on the state space of any dynamical system. We exploit the spectral properties of Koopman operator to construct a linear system for output evolution, and thereby propose a new framework for exploiting linear systems/control theory in context of nonlinear analysis. This framework is model free, amenable to scalable/streaming computations, and readily combines with and complements various supervised/unsupervised machine learning techniques. We demonstrate our framework in computer vision, and prognostics and health monitoring domain with applications including time series prediction, forecasting, anomaly detection, indexing/retrieval and classification.

Biography: Amit Surana received his Bachelor’s degree in Mechanical Engineering from Indian Institute of Technology Bombay in 2000, his M.S. in Mechanical Engineering and M.A. in Mathematics both from Pennsylvania State University in 2002 and 2003, respectively, and his PhD in Mechanical Engineering from Massachusetts Institute of Technology (MIT) in 2007. He was awarded the Padmakar P. Lele Outstanding Research and Thesis award for his PhD Thesis on nonlinear dynamics of three dimensional unsteady fluid flow separation at MIT. Since 2007 he has served in various roles of increasing responsibility at United Technologies Research Center (UTRC), where he is now a Principal Research Scientist. Over past 5 years at UTRC, Amit has been a principal investigator for various internally (UTRC) and externally government (e.g. AFOSR, Army) funded projects in the areas of collaborative robotics with emphasis on human machine teams, and data analytics with an interdisciplinary approach combining techniques from machine learning, dynamical systems and control theory. During 2007-2010 at UTRC, Amit worked on problems related to model reduction, estimation and control in distributed parameter systems, scalable uncertainty quantification, and sensor networks. For his work on uncertainty quantification, Amit received the Technical Excellence Award in 2015, which is UTRC’s highest recognition for an individual contribution to Science & Engineering. His research interests are broadly in the areas of nonlinear dynamics, system and controls, decision making under uncertainty, machine learning, multi agent systems, and human supervisory control. He has published 15 journal papers and 35 peer reviewed conference papers.