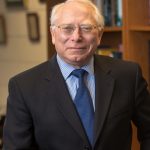 Climate and Space Sciences and Engineering

Tamas Gombosi is the Konstantin Gringauz Distinguished University Professor of Space Science and the Gerstacker Professor of Engineering at the University of Michigan.
Over his four-decade-long career at Michigan he participated in a number of space missions (Cassini, Rosetta, Stereo, MMS and others). In the last two decades he has led a highly interdisciplinary team that developed the first solution adaptive (AMR) global magnetohydrodynamic (MHD) simulation code of space plasmas. His most recent research focus is to bring advanced machine learning to space weather modeling.
He is Fellow of the AGU (1996), Member of the International Academy of Astronautics (1997), recipient of AGU’s inaugural Space Weather Prize (2013), Van Allen Lecturer of AGU’s SPA section (2017), recipient of the Kristian Birkeland Medal (2018), and recipient of AGU’s John Adam Fleming Medal (2020).