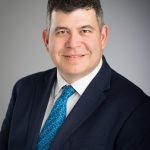 Professor of Surgery, Pharmacology, and Biomedical Engineering, Director of the Center for Surgical Innovation

In his various roles, he has helped develop several educational programs in Innovation and Entrepreneurial Development (the only one of their kind in the world) for medical students, residents, and faculty as well as co-founding 4 start-up companies (including a consulting group, a pharmaceutical company, a device company, and a digital health startup) to improve the care of surgical patients and patients with cancer. He has given over 80 invited talks both nationally and internationally, written and published over 110 original scientific articles, 12 book chapters, as well as a textbook on “Success in Academic Surgery: Innovation and Entrepreneurship” published in 2019 by Springer-NATURE. His research is focused on drug development and nanoparticle drug delivery for cancer therapeutic development as well as evaluation of circulating tumor cells, tissue engineering for development of thyroid organoids, and evaluating the role of mixed reality technologies, AI and ML in surgical simulation, education and clinical care delivery as well as directing the Center for Surgical Innovation at Michigan. He has been externally funded for 13 consecutive years by donors and grants from Susan G. Komen Foundation, the American Cancer Society, and he currently has funding from three National Institute of Health R-01 grants through the National Cancer Institute. He has served on several grant study sections for the National Science Foundation, the National Institute of Health, the Department of Defense, and the Susan G. Komen Foundation. He also serves of several scientific journal editorial boards and has serves on committees and leadership roles in the Association for Academic Surgery, the Society of University Surgeons and the American Association of Endocrine Surgeons where he was the National Program Chair in 2013. For his innovation efforts, he was awarded a Distinguished Faculty Recognition Award by the University of Michigan in 2019. His clinical interests and national expertise are in the areas of Endocrine Surgery: specifically thyroid surgery for benign and malignant disease, minimally invasive thyroid and parathyroid surgery, and adrenal surgery, as well as advanced Melanoma Surgery including developing and running the hyperthermic isolated limb perfusion program for in transit metastatic melanoma (the only one in the state of Michigan) which is now one of the largest in the nation.