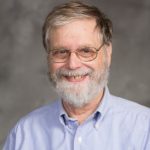 Among the many distinctions in Douglas Richstone’s career is leading the team that produced a fundamental astronomical insight – that most galaxies have a supermassive black hole at their center (see below). As a member and then leader of the Nuker Team, Richstone has spent decades assessing dynamics at the center of nearby galaxies. By blending high-resolution observations with computational models of the motions of stars in gravitational fields, his team has confirmed the presence and mass of black holes in a variety of galaxy types. He’s now using similar techniques to assess the distribution dark matter within galaxies.

Richstone and fellow members of the Nuker Team share credit for a number of key insights into the nature of black holes. They determined that every sizeable galaxy with a bulge at its center is home to a supermassive black hole. They also discovered that its mass correlates with both its host galaxy’s luminosity and the average kinetic energy of the galaxy’s stars. Building on these relationships, they then found that the mass distribution of black holes today corresponds to the luminosity distribution of quasars in the early universe. Although not surprising, the result constrains the history of black hole formation and growth in the universe over the past 10 billion years.

Exploring why some bulgeless, pure disk galaxies (which should theoretically be without a central black hole) exhibit quasar-like phenomena; determining why the relationships among black hole mass and a galaxy’s kinetic energy and luminosity appear to break down for the very brightest galaxies.