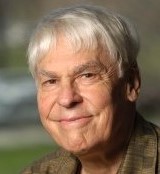 I would like to deal with the problem of being neither an applied mathematician nor a pure mathematician, yet feel that I am a mathematician. Historical examples such as Newton, von Neumann, Turing and Watson-Crick will be discussed. Also I will try to  understand what I am doing now (mathematics?).  I will go back to my Ann Arbor days 1948-1956 in these discussions.

A reception for Professor Smale will be held immediately following the lecture in the Mathematics Department second floor atrium.