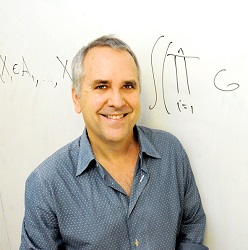 Bio: Michael I. Jordan is the Pehong Chen Distinguished Professor in the Department of Electrical Engineering and Computer Science and the Department of Statistics at the University of California, Berkeley. He received his Masters in Mathematics from Arizona State University, and earned his PhD in Cognitive Science in 1985 from the University of California, San Diego. He was a professor at MIT from 1988 to 1998. His research interests bridge the computational, statistical, cognitive and biological sciences, and have focused in recent years on Bayesian nonparametric analysis, probabilistic graphical models, spectral methods, kernel machines and applications to problems in distributed computing systems, natural language processing, signal processing and statistical genetics. Prof. Jordan is a member of the National Academy of Sciences, a member of the National Academy of Engineering and a member of the American Academy of Arts and Sciences. He is a Fellow of the American Association for the Advancement of Science. He has been named a Neyman Lecturer and a Medallion Lecturer by the Institute of Mathematical Statistics. He received the David E. Rumelhart Prize in 2015 and the ACM/AAAI Allen Newell Award in 2009. He is a Fellow of the AAAI, ACM, ASA, CSS, IEEE, IMS, ISBA and SIAM.

For more information on MIDAS or the Seminar Series, please contact midas-contact@umich.edu.