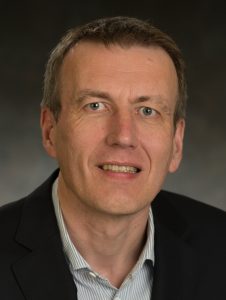 Sparsity and Decomposition in Semidefinite Optimization

The talk will focus on applications of classical results in linear algebra and graph theory, and, in particular, the fact that for chordal sparsity patterns it is easy to compute zero-fill Cholesky factorizations, and maximum-determinant or minimum-rank positive semidefinite completions. It will be shown how these results can be used in semidefinite optimization algorithms (interior-point, first-order, and decomposition algorithms).  Data structures and techniques from the sparse matrix literature, such as elimination trees, supernodal elimination trees, and multifrontal algorithms will play a unifying role in the derivation of the key results and algorithms.

Bio: Lieven Vandenberghe is Professor in the Electrical and Computer Engineering Department at UCLA, with a joint appointment in the Department of Mathematics.  He received a Ph.D. in Electrical Engineering from K.U. Leuven, Belgium, in 1992.  He joined UCLA in 1997, following postdoctoral appointments at K.U. Leuven and Stanford University. He is author (with Stephen Boyd) of the book Convex Optimization (2004) and editor (with Henry Wolkowicz and Romesh Saigal) of the Handbook of Semidefinite Programming (2000).