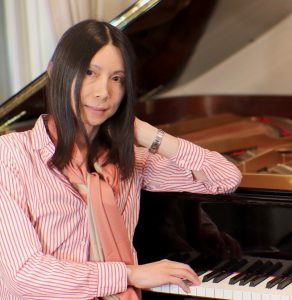 University of Illinois at Chicago

Abstract: In this talk Dr. Leow will share her reflections, as both a computational researcher and a practicing psychiatrist, on the current landscape of psychiatric neuroimaging research and where we go from here.

To this end, she argues that recent advances in data science and information technology will revolutionize the way we conceptualize psychiatric disorders and enable us to objectively quantify their symptomatology, which traditionally has been primarily based on self reports.

To illustrate, she will highlight two lines of ongoing research that apply data science approaches to the assessment of mood and cognition. In the first example, she will propose how EEG connectomics coupled with manifold learning and dimensionality reduction may allow us to measure the ‘speed of thinking’ on a sub-second time scale. In the second example, she will introduce her recent joint work with Dr. Melvin McInnis that seeks to unobtrusively turn smartphones into ‘stethoscopes’ of the brain, in real time and in the wild.

Bio: Dr. Alex Leow is an Associate Professor in the Departments of Psychiatry, Bioengineering, and Computer Science at the University of Illinois at Chicago (UIC) and an attending physician at the University of Illinois Hospital. With Dr. Olu Ajilore, Alex founded the Collaborative Neuroimaging Environment for Connectomics (CoNECt) at UIC. CoNECt is an inter-departmental research team devoted to the study of the human brain using multidisciplinary approaches of brain imaging, non-invasive brain stimulation, Big Data analytics, virtual-reality immersive visualization, and more recently mobile technologies.

Most relevant to this talk, Alex is honored to the project lead of the BiAffect project. BiAffect is the first scientific study that seeks to turn smartphones into “brain fitness trackers”, by unobtrusively inferring neuropsychological functioning using entirely passively-collected typing kinematics metadata (i.e., not what you type but how you type it) from a smartphone’s virtual keyboard. The iOS BiAffect study app now powers the first-ever crowd-sourced research study to unobtrusively measure mood and cognition in real-time using iPhones and Apple’s ResearchKit framework.

The CoNECt team’s research has been extensively featured in the news, including more recently in Chicago Tribune, Chicago Tonight, Forbes, the Wall Street Journal, the Associated Press news, and the Rolling Stone.